The number of female prisoners serving a life sentence with no chance of parole has skyrocketed 43% since 2008, according to a newly minted report from The Sentencing Project.

The report, which is a joint publication from the National Black Women’s Justice Institute, the Cornell University Center on the Death Penalty Worldwide and The Sentencing Project, investigates the experiences of female prisoners, aims to help eliminate “extreme sentences” and hopes to diminish the influence of gender and racial bias in the legal system, according to information from the authors. “Racial and ethnic disparities in the criminal legal system are tightly linked to disparities in the racial composition of women serving extreme sentences,” according to the advocacy groups. “More than four in ten women on death row are people of color. And, one of every 39 Black women in prison is serving [a life sentence without the chance for parole]."

The report also highlights the work of scholar Beth Richie, who said Black women face higher incidence of abuse than other demographic groups and are more likely to have underlying conditions contributing to a unique vulnerability to “gender entrapment.” To that end, these women often have less access to intervention programs, are more likely to be involved in an assault that includes a weapon and often have a “legitimate distrust in police to respond effectively to violence by an intimate partner.”

“The well-documented outcomes of the domestic violence movement, including pressing for law enforcement solutions such as mandatory arrest and sentencing enhancement policies, also extend to extreme punishments imposed on individuals who commit homicide to escape domestic violence,” reads the report.

According to the American Civil Liberties Union (ACLU), the number of women in the criminal justice system has risen steadily over the past 25 years, and more than 200,000 women are now incarcerated. They say many of those incarcerated individuals face mental health issues, substance abuse problems and have a history of sexual or physical abuse. Too many do not get the help they need, says the legal advocacy group.

“Every prosecutor describes women convicted of murder as cunning, diabolical, monster, and evil,” wrote Kwaneta Harris, an incarcerated woman convicted of murder in Texas cited in the report. “I’ve yet to encounter these ‘monsters,’ although I’ve met plenty of women with mental illness, untreated and undiagnosed.”

The report concurs with that assessment. “Many women facing extreme sentences experienced trauma and abuse prior to their imprisonment. A majority of the women have endured sexual and/or domestic violence, and the legal system has consistently failed to take their experiences into account. Imprisonment often exacerbates their trauma,” according to The Sentencing Project. 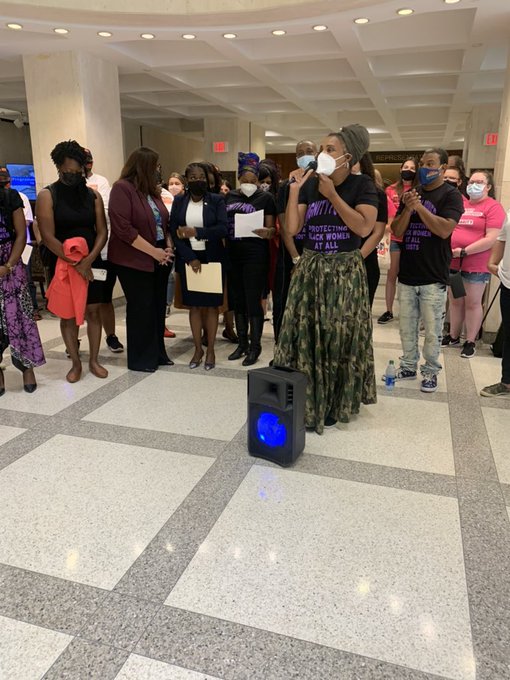 "Protests erupted in the FL Capitol as women from across the state chanted 'protect all women' to support a law that protects incarcerated pregnant women."

Per the report, more than 6,600 women in the U.S. are serving a life sentence with parole, without parole or a sentence of more than 50 years. Close to 2,000 women are serving life sentences with no chance at parole and are expected to die while incarcerated, adds the report. In the 27 states that permit the death sentence, there are 52 women awaiting execution.