The most prolific representation of women in Congress is among several of the historic milestones being celebrated during the 2022 Women’s History Month, which will be celebrated across the nation this March.

The Library of Congress, National Archives and Records Administration, Smithsonian Institution and United States Holocaust Memorial Museum are among the many institutions sponsoring events throughout the month. To that end, the Library of Congress, along with its partners, highlighted the achievements of the historic 117th Congress last week by inviting female members to talk about their experiences in policymaking and share their hopes for the future, according to information from the event’s sponsors.

According to information from the Pew Research Center, women now comprise more than one-quarter of Congress, the highest percentage in American history. Additionally, on Tuesday, March 8, historian Mary Sarah Bilder will be examining the role Eliza Harriot played in the development of the U.S. Constitution. Harriot delivered an address at the University of Pennsylvania attended by George Washington and other delegates during the nation’s formative years.

“As the first such public female lecturer, her courageous performance likely inspired the gender-neutral language of the Constitution,” reads information for the event. “[The event] reconstructs Eliza Harriot’s transatlantic life, paying particular attention to her lectures and to the academies she founded, inspiring countless young American women to consider a college education and a role in the political forum.”

To close out the month, the National Museum of American History will posthumously present Justice Ruth Bader Ginsburg with an award for her “groundbreaking judicial work and commitment to gender equality and human rights.” Her children, Jane C. Ginsburg and James S. Ginsburg, will accept the award on her behalf on Wednesday, March 30.

Further, this Women’s History Month will also feature another historic milestone–the continuation of Ketanji Brown Jackson’s path to the Supreme Court. If confirmed, she would be the first Black woman to serve on the nation’s highest court.

President Joe Biden, during his announcement of Jackson’s nomination, said he was particularly fortunate to have the counsel of Vice President Kamala Harris, who has served on the Senate Judiciary Committee in addition to being a former Attorney General in the state of California, when narrowing down his shortlist to replace outgoing Justice Stephen Breyer. “ … I looked for someone who, like Justice Breyer, has a pragmatic understanding that the law must work for the American people. Someone who has the historical perspective to understand that the Constitution is a resilient charter of liberty. Someone with the wisdom to appreciate that the Constitution protects certain inalienable rights—rights that fall within the most fundamental personal freedoms that our society recognizes,” Biden said. 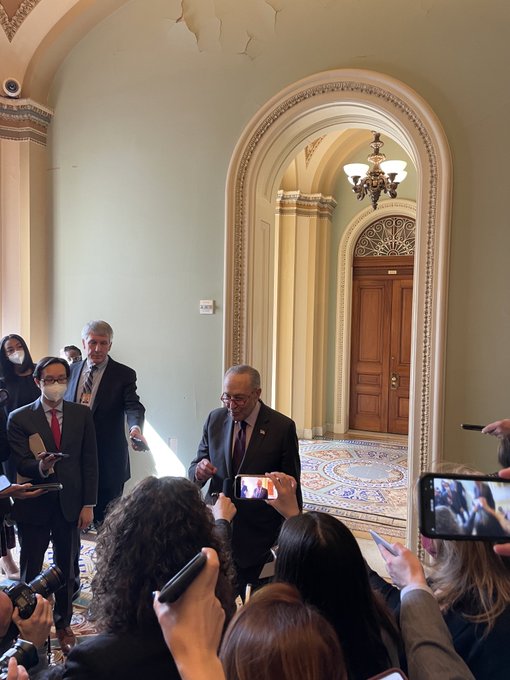 "SCHUMER on his meeting with Ketanji Brown Jackson. “She belongs on the court. She reminds me in certain ways of Justice Breyer … she is so thoughtful and evenhanded and tries to look at both sides”

At present, Jackson is in the process of being evaluated by the American Bar Association Standing Committee on the Federal Judiciary, which engages in an “independent, nonpartisan peer evaluation” of Supreme Court nominees.

“While it is important to fill any vacancy to the Supreme Court in a timely manner, the Senate process of advice and consent must allow adequate time for thorough consideration of Jackson’s nomination and must not be rushed due to partisan considerations,” reads information from the association. “That is essential to the process of assessing lifetime appointments to the highest court in the United States.”